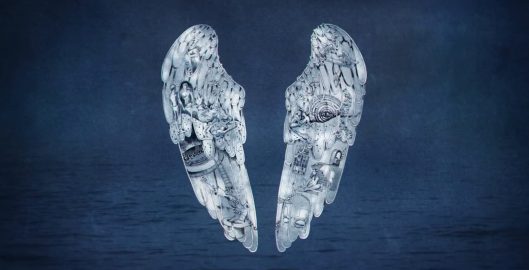 Last week saw Coldplay release a full 43 minute stream of their 6th studio album on iTunes, a week before it was released. The fans went wild.

Richard Barnett at Trunk Animation was approached by commissioner Sam Seager at Parlophone with an image, and a question. The image turned out to be Coldplay’s beautiful new album cover designed by Mila Fürstová, and the question, can we bring the mesmerizing, highly detailed etching to life, without losing its look and character?!

A plan was hatched, some tests carried out and rather than just creating a 10 second looping GIF, Trunk Directors Alasdair + Jock came up with the idea of an epic 43 minute long animated film that unfolds as the album is played.

To begin with Mila’s Ghost Stories artwork had to be meticulously traced by hand, basically pixel by pixel, in order that Alasdair + Jock and their team at Trunk could work at the scale necessary, 7K, which is nearly 4 times HD! The new high-resolution image they created enabled tiny elements within Mila’s etching to be worked on in a lot more detail, allowing for tiny sections to be animated, and dynamic camera moves added. Jock noted, ‘the painstaking attention to detail in the re-drawing was essential in order to retain the aesthetic of Mila’s artwork, and allow new elements to be added and animated”.
During this process sections of the image had to be re-imagined in order that when you moved one object or character, you weren’t then left with a hole in the background, so Jock had to learn Mila’s style of mark making.

The film used a multitude of animated techniques, and a team of 10 animators and art workers using 3D, 2D cuts outs, and classical 2D hand drawn came together to create the astounding 50 individual sections. Each section had to be animated in such a way that they could be looped, ranging from 30 secs to an impressive 2 minutes, which of course just made everything that little bit harder! Once animated, each section then had to go through a heavy compositing and effects stage in order to pull all the different techniques together, and make sure the line style in the animation was exactly the same as that of the album artwork.

To help build an overall visual narrative for the album, the team slowly revealed more and more detail as the tracks progress allowing the viewer to travel in and out of what is in essence a world within a world. The team also utilised time-lapse photography and SFX to create the world ‘outside’ the wings. Time lapse clouds, sea, and mist are mixed with affected art worked shooting stars and a waxing and waning moon which casts the wings into darkness as track 5 ‘Midnight’ progresses in the middle of the album.

The amount of detail, the length, and the technical processes involved were so vast that Trunk had to bring in an extra bank of powerful computers, known as a render farm, to crunch the raw data. 53,000 unique frames had to be processed in such a way that the process wouldn’t grind to a halt, which meant that some 300,000 smaller pre-renders had to be made over 4 long and grueling days. (A special thanks to our fuse box for providing us with two lovely blow outs, wiping out 7 hours of work!)

Al notes ‘It was a massive undertaking but we wanted to create something unique for the album, and we loved the idea of bringing this image to life with some really beautiful movement, in a way that matched the intricate and complex look of Mila’s artwork.’ Richard added ‘The finished project has to be up there in our top 5 along with the projections for Madness at the Queens Diamond Jubilee, Rok’s lyric vid for The Rolling Stones, our visuals for Keith Urban at the Country Music Awards, and of course Elton John’s Million Dollar Piano visuals!’

The final film was streamed on iTunes, May 12th at 9pm. And Coldplay’s 12 million fans took to Twitter immediately with a buzz of lovely comments and messages, they of course loved the album, and gushed at the animation, and as @Coldplay tweeted ‘Kudos and a thousand thank yous @trunkanimation for creating such a beautiful animation’, we instantly made hundreds of new friends!