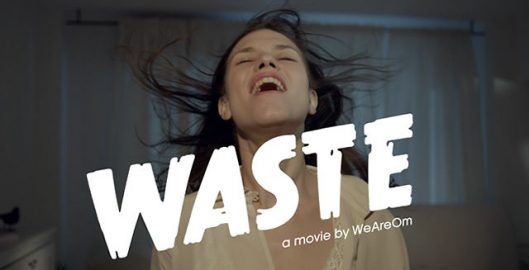 Trunk’s directing collective WeAreOm have just completed a fabulous new film called ‘Waste’. ‘Waste’ came about after WeAreOm had worked on a commercial that incorporated pop-ups, As Director Anton Groves noted “We realised that no one had thought of integrating pop-ups into a real life context, so we had this idea of a film about a wasteful character who has these monsters scattered about his mundane life, consuming all his waste”. Set and filmed in Bucharest the short stars Mihai Stanescu as the wasteful slacker and award-wining actress Ana Ularu as the female lead. But the real stars of the show are the monsters that include Syd who lives in a filing cabinet and Creech the toilet monster that no one should have to deal with after a heavy night. Damian Groves from WeAreOm and Andy Sinboy created the brilliant pop-up monsters and the film was funded by WeAreOm’s production company studioset.tv. The film is to be released on-line at the beginning of May but here is a link

to a trailer of the film